Further down you can watch an excerpt from a recording of a Live-Concert in Berlin.

... Bender's video renderings using imagistic, dreamlike themes that are at once beautiful and disturbing, layering them in a organic and hypnotic manner. ... 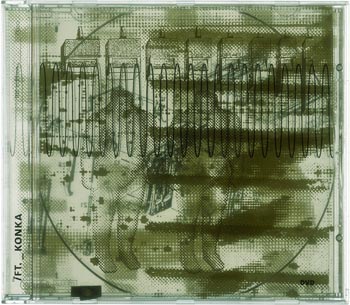 
7ft._KONKA DVD Reviews:
by JOHN EYLES : "This forty minute DVD, recorded live in Berlin, pairs Sonja Bender's video sampling with Michael Renkel's guitar and electronics. ...
...Unlike most rock, improvised music does not lend itself to literal or narrative video, so the visuals put alongside it are often completely abstract. Here, Bender adopts a rather different approach: as well as abstract images (interference/white noise, "Venetian" blind cut ups...) she uses images and sequences (often human images; there is very little time when there isn't something human on screen) that could have a narrative meaning, but she does not use them to construct a narrative. ...
...The opening ninety seconds of the DVD are the most extreme musically and visually, a barrage of multi-layered, rapid-fire guitar accompanied by very rapidly changing images, some overlaid, some held for a second or so - which in context seems like forever. ...
... Renkel and Bender are to be congratulated on a happy marriage of sound and vision."
Source of the complete rewiew: www.allaboutjazz.com

by BRIAN OLEWNICK: "... Bender's work, on the other hand, held my attention throughout. She strikes a fine balance between rapid fire images and sustained shots. The x-ray "movie" of what appears to be a child's skull, held for several minutes, is hauntingly beautiful. She uses a great deal of staggered repetition, a back and forth approach that I could understand some viewers finding grating although I thought it generally worked quite well. A later montage that includes a black and white TV image of a young guy writing, overlaid with shots of a man repeatedly turning in his sleep and another gently caressing his penis, is as oneirically moving as a subsequent bathroom sequence is nightmarish."
Source of the complete rewiew: www.bagatellen.com